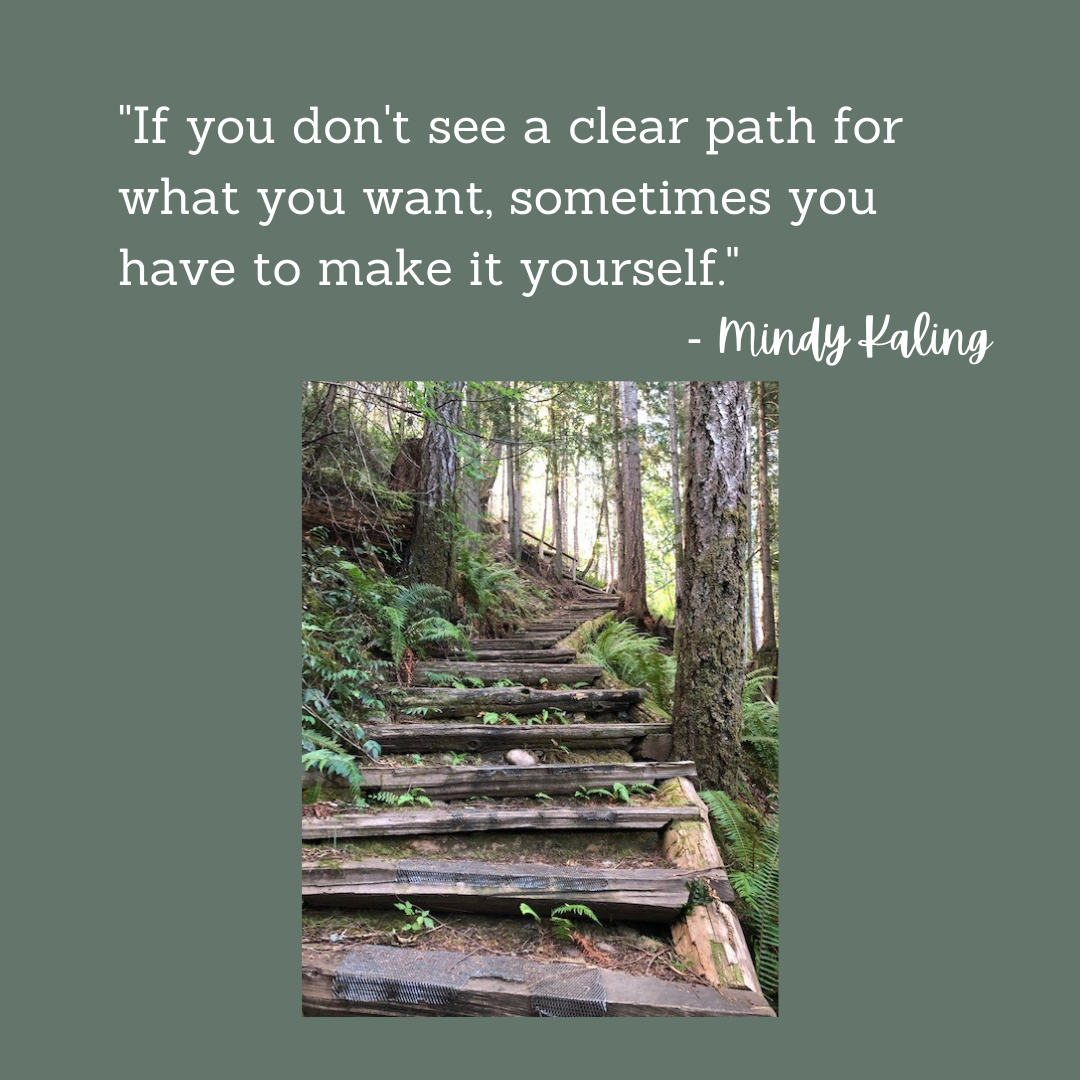 Why is it often easier to see the potential and possibility in others than it is to see it in yourself? A friend recently told me that she knew (4 years ago!) that I would one day start my own business. Well, that made one of us. And until part way through 2019, if you’d have asked me if self-employment could one day be an option, I would have dismissed the question and adamantly declared that I didn’t have it in me.

So, how am I here? How did this become the right choice for me and how did I get comfortable in my decision?

I gave myself permission to focus on the journey, not the destination. I felt restless after about 5 years in my last role. My restlessness was telling me that I needed a change and finding a new job seemed like the natural next step. So, I put my resume out to a few places and accepted invitations to talk with recruiters. Sadly, none of the jobs I interviewed for panned out. The rejection stung, but it forced me to really stop and think about what I wanted, who I wanted to be, and what was important to me. Looking back now, I realize that the rejection was a gift. It kicked me out of my narrow, limiting, and (maybe a little) unimaginative view of what my next career move could be. The rejection ultimately pointed me in a new direction.

I didn’t start with the goal of self-employment. I didn’t start with any goal at all. I knew that I wanted a change so with that in mind, I decided to make intentional and purposeful choices to learn, fill in any identified gaps, grow, and feel more confident about who I was and what I could do. It would take another 5 years for me to figure out what was next, and it was a journey for sure. I moved in all directions – forwards, backwards, sideways, in circles, and stalled. And it has all been worth it. I am officially one year into my self-employment journey and 100% loving it.

It started with the absurd. I have written about how the experience of being diagnosed with and going through cancer treatment was transformational for me. In that reflection, I left out one important aha moment. It was a few months into my cancer journey when I was told that chemo might be a preventive option for me. I remember feeling stressed while waiting for my test results, so I met up with my friend Tara to walk and talk it out. On our walk, I said something like, “I kinda hope that I have to have chemo because that will mean that I can take some time off of work.”

Let’s just pause for a moment to acknowledge the complete absurdity of that statement.

Of course, I recognize how bonkers that statement is now. And yet, that was how I was feeling. To Tara’s credit, she didn’t laugh at me. She got it. She understood that feeling of stuck – where you just want someone or something to give you the reason to make a change.

I wasn’t ready to make a change yet, but my comment stayed with me. If I was feeling so stuck that my only way to make a change was chemo, then I would have to do some inner work and soul-searching to figure out how to get unstuck.

PS) this is in no way a comment on my former employer (who was excellent and supportive of me during cancer). This is 100% a comment on myself and my fear of making a change and my perception that I did not have the control to make a change. It was a signal to me that I was ready to learn and grow. My lesson learned – don’t write off the absurd moments; ask yourself – what is this absurd moment telling you?

I invested in myself. In January 2019, I made the decision to apply for the Royal Roads University (RRU) Executive Coaching program and in April 2019, I started an intense 8-month learning journey. Enrolling in this program felt like the best way to fill in some self-identified skills gaps. I knew that I would come out of the RRU program with formal coaching skills, practical experience, the credentials and credibility to be seen as a coach by others, and most importantly, the confidence to incorporate coaching into whatever I would do next (including finding a way to bring these skills into my current role).

What I didn’t expect from the experience was all of the inner work that we would be asked to do. Intellectually, I understood the value of doing the inner work, but I had no idea what that work would look like or what I could get out of it. And, there was something powerful about being immersed in this experience with people who were also invested in their learning and their personal growth. As the months went on, self-reflection became a habit and I got increasingly comfortable looking inward. I also got more clarity on who I was and what I wanted out of work.

I connected the dots. One of the challenges of not having a direct path is that it can be hard to trust where you are headed. This is where all of the inner work and self-reflection paid off. Doing the work helped me to pause and notice my experiences, thoughts, and feelings, and then to connect them in a meaningful way.

There were three pivotal experiences that became inputs in my decision to start my own business. One happened to me (cancer), one was a fun side project that unexpectedly unlocked new possibilities for me (the podcast), and one was an intentional investment in myself (RRU).

And then one more significant reflection happened in August 2019. It was a week where work, school, and life all felt extra busy. After one particularly busy and unfulfilling workday, I said to myself, “Surely, I was meant for greater things than this.” This was a huge moment for me to notice because I had never said that to myself before. Before this moment, my go-to response to stress was to imagine an alternate reality – one where I had a no-pressure, low-stress job. For some reason, I had a different response this time. And, once I said it, I couldn’t unthink it.

I started asking myself what “greater things” could look like for me. And for the first time, I was open to the possibility of making some bold moves, like quitting my job and starting my own business.

I accepted the scary. By September 2019, I was 90% sure that I would choose the self-employment path. But there was one lingering fear holding me back and that was my fear of having to do business development. How would I find work? How could I get comfortable talking about myself? What if I failed? Where would my income come from? It all seemed so hard. And risky. And even though I had a general plan for what my business would be, I had a solid professional network, and I had set aside savings in case it was a struggle to get started, this somehow still didn’t feel like enough.

In the end, it was one powerful question from my friend Sarah that convinced me to take a chance on myself. I told her that I wanted to get over my fear of business development and her response was, “What if you accepted that it will always be a little bit scary?” That one question was all I needed to reframe my fear. I didn’t need to fully eliminate the scary. If I learned to accept that it would always be part of the process, then I could learn to manage it.

I said it out loud. The decision to start my own business was not fully formed when I told my boss that I thought it was time for me to make a change. We had been talking about my career all year, so it wasn’t a complete surprise to him. That said, I kind of just blurted it out. And once I did, that made it real. And once I made it real, I moved it forward.

And after one year, I have NO regrets.

It has been neat to reflect on the years leading up to my decision to trade in full-time employment for self-employment. And it has been eye-opening to realize that my decision was not about making one bold move. It was about having the courage to experiment, to step out of my comfort zone, and to invest myself. It was ultimately a series of small steps that added up to one big decision.

What’s one small step that you can do today that might put you on a new path forward?