Skip to content
4 Years Ago, I Had Breast Cancer 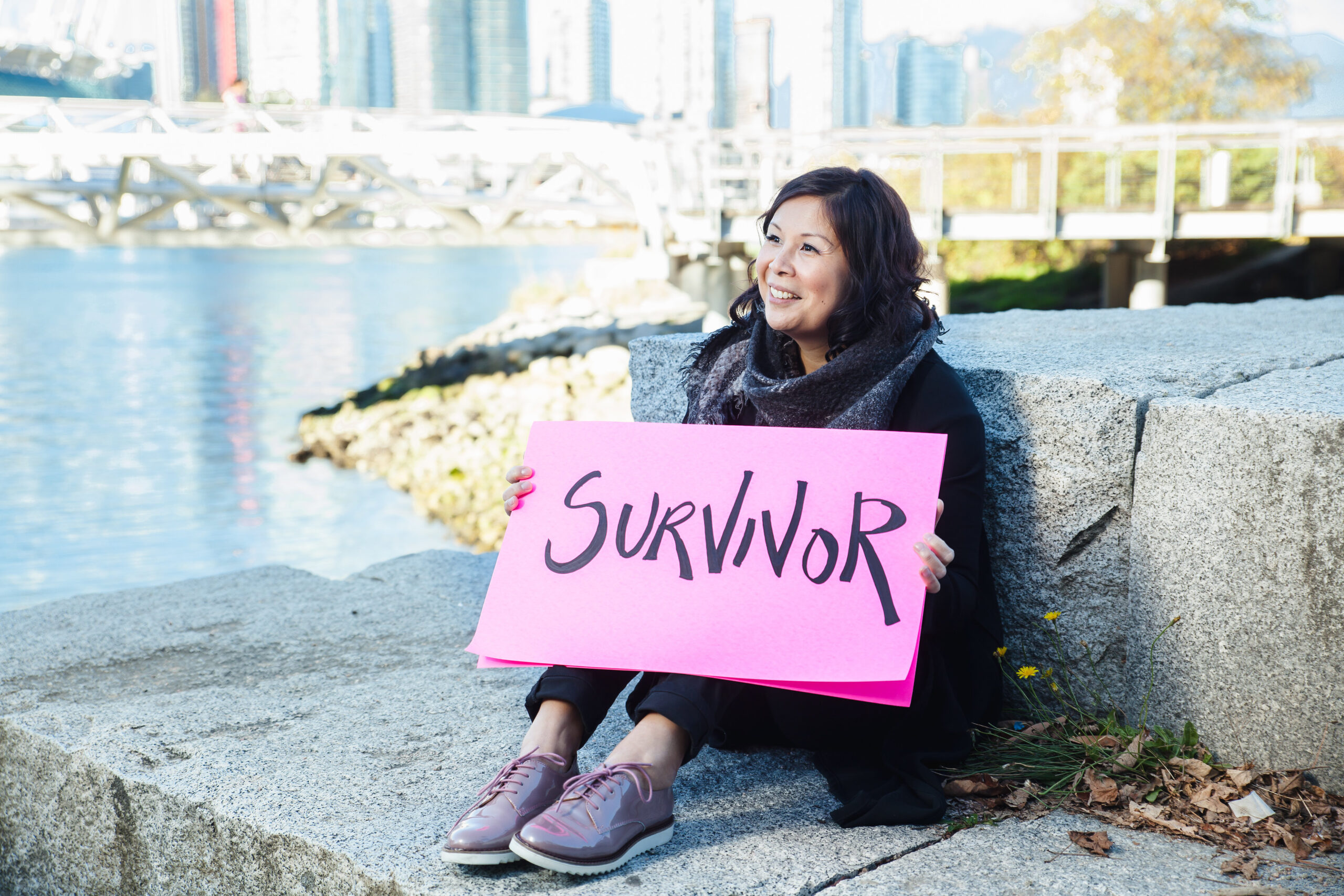 4 years ago, I was diagnosed with breast cancer.

I accidentally and fortuitously found a lump on my right breast on December 12, 2016. After 5 weeks of appointments, screenings, and what felt like a lot of waiting, my diagnosis was confirmed on January 23, 2017.

It still feels surreal to say that I had cancer. Sometimes that year feels like forever ago; it’s a distant memory that I rarely think about. And sometimes, it feels like yesterday and I can remember exactly what happened, when it happened, and how I felt. I mostly can’t believe that was my life in 2017.

During that year, I was asked (many times) if I would live life differently once I was cancer-free. Pro tip if you know someone going through cancer (and I truly hope that you don’t), unless they bring up the topic, please don’t ask them that question. It’s a valid question and I knew that the experience would likely change me in some way, but as I was going through it, I had no idea how I might change and I most definitely did not have the energy to think beyond a week (sometimes a day) at a time. That question also triggered the “achiever” in me and when asked, I felt a weird obligatory pressure to come up with something profound and meaningful. Of course, I had nothing profound or meaningful to say about it, so then I ended up feeling like a failure. A failure with cancer!

As part of my reflection process, I read the journal that I kept during that time. I wrote in it everyday from December 2016 to the end of 2017. Looking back now, I am grateful for that journal, and for the process of journalling. At the time, I was only processing what I needed to know for each leg of my treatment journey. I wasn’t ready to process all of my other thoughts and feelings. My journal became a trusted confidant; always ready to listen and without judgement. It held onto my memories for safekeeping, knowing that I would likely want to remember and process them at some point in the future. And, it became an outlet for my stress and anxiety. In my memory, I felt more calm than stress throughout that year, but as I re-read my journal, it is evident that I am not remembering that accurately. Stress and anxiety jump off the pages. Turns out that I had been feeling and living with a constant low-level of stress the entire time.

I’m glad that I waited 4 years to reflect on the experience and how it impacted me. I have just wrapped up a year where I experienced the most personal change and transformation that I think I have experienced in my adult life. There have been many contributing factors to this change and I can now say that having cancer was the catalyst for a lot of it. It wasn’t a light bulb, aha moment kind of catalyst. And it wasn’t a deal that I made with myself that if I beat cancer, I was going to completely change my lifestyle. It was more of a subtle catalyst that opened my eyes to what was important to me, who I wanted to be, and how I wanted to live my life. So, what is different for me now?

My diagnosis, the physical treatment, and the associated waiting spanned about 8 months. When I wrapped up radiation and waited 2 weeks (the minimum amount of time that my radiation oncologist said would take for me to physically feel better), I was ready to jump back in with both feet. I replaced my sweatpants with going-out-of the-house clothes, I planned to return to work, and I planned to resume my fitness regime. I wanted to prove (mostly to myself) that I was “back to normal.” I was not. It was an eye-opening realization to learn how my mind had protected me. It had only allowed me to process what I needed to process to get through each step along the way. Once the physical treatment was done, I still needed to process all of the feelings and emotions associated with the fact that I had had cancer. So what did that mean? You know it…more waiting.

For me, being diagnosed with breast cancer and the year that followed, created a pause in life as I knew it. Interestingly, it felt a lot like 2020 where I think the whole world was diagnosed with a pause in life as we knew it. Sometimes the pause felt tedious and boring. But once I accepted it and I learned to sit with it, I realized that I had been given a gift. Not cancer; that is no gift. I was given the gift of time; the opportunity to slow down and take notice. I could do this guilt-free because, hey, I had cancer. Who was going to expect me to operate at my previous pace?

For the first time in my life, I started to notice how certain people or activities either energized or drained me. At the same time, I became more aware of the fact that I have a finite amount of energy to give. When I did the math, I realized that if I wanted to keep my stress levels down and my spirits up, I was going to have to be selective about who I spent time with and how I was spending my time. I got better at knowing my boundaries and then setting and respecting them. Having cancer gave me the “excuse” that I needed to get comfortable with boundary setting.

I’m still a work in progress when it comes to setting boundaries but I’m a lot better at it now. I’m better at setting boundaries and I’m better at feeling good with them (i.e., a lot less guilt). And once I got through the final “waiting phase” of cancer (which I think took another 6 months), my life did return to a faster and busier pace. This time though, I had a new tool with me: the pause. Yup, I’ve kept it going after cancer. I took control of it. Cancer may have forced a pause on me, but now I bring it out whenever I need it and I think that I’m better for it.

I’m ready to disrupt my life. Before cancer, I thought that I had a pretty great life. There seemed to be no need to question it and yet, when I read through my journal, my thoughts and feelings about wanting something more out of work and my career were a recurring theme. Things that seemed “important” in my job seemed a lot less important during my year of cancer. That brought up a lot of feelings of guilt. My team and my employer had been amazingly supportive during this time and I felt disloyal and bad for possibly wanting something different. It felt uncomfortable to say that I wanted something different because I didn’t even know what that was. What I did know was that I wanted to feel something different.

It’s been interesting to look back on my comments about work and to realize that I planted the seeds of change four years ago. Of course, I did not yet know the changes that would come, but once I got through cancer, I was finally ready to really see the things I was seeing, listen to myself, consider what could be different, and take steps to move my life in a different direction. It would be another two years and a lot of internal work before I would make the decision to leave my employer to start my own business and I’m not sure if this would have happened without the catalyst that was cancer.

A shift in my sense of self. Before cancer, I consciously and unconsciously placed a lot of importance on things that externally impacted me. I cared a little too much about what people thought about me and whether or not people liked me. I was like Switzerland in all of my relationships; mostly neutral and constantly adapting my personality and communication style to fit the personality and communication style of others. And while this made for great relationships and low conflict, it also served to mask who I really was and maybe even made me a little boring.

Then cancer happened. And I had to shift my focus from others to myself. That was hard. I had to set years of conditioning aside and learn to ask for support. I had to be okay with showing vulnerable emotions. I had to learn how to live with uncertainty. All of it felt very uncomfortable (and still does in many ways). But when I started to make that shift, I also noticed something else. I felt different. I was a little more energized. I was a lot more clear about my values. I had moved out of neutral.

It’s crappy to go through tough times but they really did let me know what I’m made of. The best part for me is that while the cancer is gone (hooray!), the shift in my sense of self has stayed (double hooray!). If you know me, you will know this has shown up in many ways: in how I present myself in our podcast, in my decision to enroll in the Royal Roads University (RRU) executive coaching program, in how I decided to fully participate in the RRU program, in my decision to leave my excellent job after 10 years, in how I am running my business, and now, in writing this blog.

Shifting my sense of self still feels hard, but it feels less hard than when the shift started. And I wouldn’t have made the shift if I wasn’t forced into it. Thanks, cancer.

So, much like 2020, I was pretty happy to say good-bye to 2017. At the same time, I would be remiss if I didn’t look back on 2017 with gratitude. Gratitude for an early diagnosis, gratitude for my health, gratitude for the people in my life, and gratitude for the unexpected and much-needed kick in the pants to really look at my life. Ultimately, I didn’t need cancer for me to learn these lessons. Cancer was the catalyst, but the real work was in the reflection, introspection, and decision to take control of who I wanted to be. None of us needs cancer for that.